The influence of snow cover and cold-season temperatures on growing-season processes Ecosystem respiration, nutrients, plant growth and phenology in the high Arctic 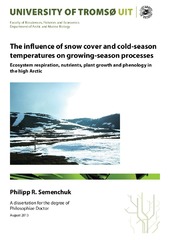 My thesis ‘The influence of snow cover and cold-season temperatures on growing-season processes’ is treating the ongoing trend and future projections of increasing snow cover thickness during the Arctic winter. More snow means two things: warmer soils during winter and later melt-out in spring. Both are important changes for Arctic terrestrial ecosystems, since warmer soils will increase CO2 emissions from the soil and at the same time increase nutrients for plant growth. Later melt-out means that the plants have even less time to grow and take up C than usual, which means that the Arctic could become a net source of CO2. However, increased nutrients might counteract that effect. We increased snow depth with the help of snow fences to test how Arctic ecosystems might react in a more-snow scenario. The extra snow has increased soil temperatures during the whole, long winter, but also made the winter longer by delaying melt-out. During winter, we measured CO2 emissions from the soil, a natural process mainly done by microorganisms (ecosystem respiration). We found that more CO2 was coming from areas with increased snow, because higher temperatures stimulate microbial activity – even when the soil is frozen. Surprisingly, CO2 emissions during summer were lower in these areas after a few years of increased snow depth. That was probably because the microorganisms used up their substrates or ‘food’ during the warm winters so they didn’t have enough left for summer. This high microbial activity during winter simultaneously produced more nutrients for plants. Therefore, some species grew bigger in areas with deep snow although they had less time to grow because of the delayed melt out. This extra uptake of C could counteract the increased CO2 emissions during winter.