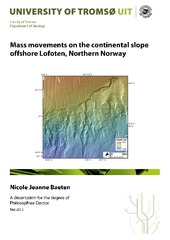 Swath bathymetry, side-scan sonar, sub-bottom profiler and seismic data from the continental slope offshore the Lofoten Islands, northern Norway reveal smaller-scale mass movements in water depths between 1100 and 2500 m. These mass movements have volumes of 0.061 to 8.7 km3 and are interpreted as translational slides involving spreading and multi-phase retrogression. The spatial variation in failure style is inferred to have been caused by the activation of different glideplanes (12.5-130 mbsf) within the thicker and more mounded contouritic deposits in the north-east of the study area. Data from a sediment core show that the shallowest style of mass movement (12.5 mbsf), was initiated within contouritic sediments characterized by high sensitivities and water contents. This unit overlies a plumite interval characterized by dilative behavior with pore pressure decrease with increasing shear strain and high undrained shear strength. As such, it is the difference in geotechnical properties which indicates that the interface between these units acts as the basal glide plane, with deformation in the weaker overlying unit. The mass movements in the study area are inferred to have been triggered by undercutting and removal of support at the foot of the slope due to large-scale mass movements that have occurred immediately south of the study area, such as the Trænadjupet or Nyk slides. Furthermore, a network of 2D seismic data reveals the presence of several paleo-canyons. The data illustrate that canyon formation is more extensive then previously thought. These paleo-canyons are buried by an extensive contourite drift interpreted to be a continuation of the Lofoten Drift. The distribution of the drift indicates changes in the depth and strength of paleo-currents. Mass movements only occur in the upper part of the sequence, most likely after the onset of the Pleistocene.