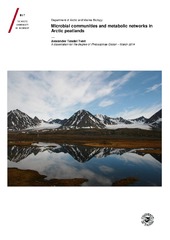 Arctic peatlands store more than one sixth of the soil organic carbon (SOC) on Earth. Microorganisms decompose SOC, leading to the production of the greenhouse gases methane (CH4) and carbon dioxide (CO2). Large temperature increases are predicted in the Arctic towards the end of the century (1–6 °C in summer and 2–11 °C in winter). How the microorganisms in Arctic peatlands will respond to this warming, and if it will result in an increased release of the stored carbon (C) as CH4 and CO2, is currently unknown. We have developed and applied metagenomic and metatranscriptomic methods to characterize the gene composition and gene expression, respectively, of in situ microbial communities in Arctic peatlands in Svalbard. Further, we exposed the peat to increased temperatures and studied the response of the microbial communities and measured changes in CH4 and CO2 production. Our results show that the Arctic peatlands inhabit a complex community of microorganisms, which cooperate for decomposition of SOC to CH4 and CO2. Bacteria are the most abundant, while smaller populations of Archaea and Eukarya are present. Our results indicated that a single species of bacteria, Methylobacter tundripaludum, was responsible for the oxidation of CH4 to CO2. When we exposed the microbiota to higher temperatures (5–30 °C), it had a drastic effect. We observed that it adapted quickly, i.e. within weeks, as indicated by a substantial increase in CH4 production. New groups of microorganisms replaced those that were active at low temperature, resulting in cascade effects throughout the CH4 producing microbial metabolic network. Predatory eukaryotes became more active, and prevented increased microbial biomass. Despite this, the result was a substantial increase in CH4 production, even within the predicted temperature increase for the Arctic. However future emissions will depend on the future rates of CH4 oxidation by Methylobacter tundripaludum.