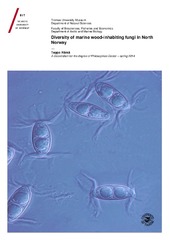 Marine fungi in arctic waters have rarely been studied. The main aim of this thesis was to explore the diversity of driftwood inhabiting fungal communities in the cold waters of North Norway. In order to gain as comprehensive view as possible, different methodological approaches were applied on the same study substrates, and the recovered fungal communities were analysed for taxonomic, phylogenetic and ecological aspects of diversity. Altogether 925 operational taxonomic units (OTUs) and species were detected using three different study methods. As a result of the morphological study, one undescribed and 16 new species to Norway were found. With a culturing method, 143 OTUs, based on clustering at 97% sequence similarity of the internal transcribed spacer region (ITS), were detected from 50 driftwood logs. 454 amplicon pyrosequencing revealed 807 OTUs from the same logs and estimated the total diversity in the area to be 1,400 OTUs (97% ITS2 clustering). Approximately 75% of the OTUs had affinity to the phylum Ascomycota, and previously overlooked taxa were detected from the marine environment. Both methods revealed that one half of the OTUs were tentatively non-marine, and that the fungal communities were structured by many geographical and environmental variables. It was shown that the study methods used target different parts of the fungal community with low overlap. The rich and diverse mycota found in this thesis contributes to the global knowledge of wood-inhabiting marine fungi, and suggests that many overlooked and undescribed species exist in this habitat. The diversity was well characterized at higher taxonomic levels, but resolution should be increased towards the terminal branches of the fungal tree of life by means of more collecting, culturing and DNA barcoding of marine fungi. The role of many tentatively non-marine species found in driftwood will be scrutinized in the future using RNA-sequencing of environmental samples.