A trait-based assessment of the Barents Sea fish community: implications for vulnerability under environmental change 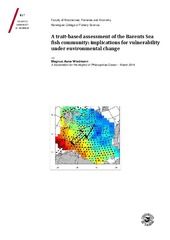 SUMMARY This is a study of the fish community in the Barents Sea and its vulnerability to disturbance such as fishing and climate change. The vulnerability of the fish community depends on its sensitivity to, and adaptability under, stress. To assess these two components of vulnerability, I have combined survey data from the Barents Sea with information about the species properties (i.e., traits), following three approaches. 1) To study the adaptability under disturbance, I have focused on functional diversity, which is a measure of the interspecies functional dissimilarities. 2) To study the sensitivity of the fish community functioning to the loss of species, I have assessed functional redundancy. 3) I have assessed the sensitivity of single species to fishing. For all these three measures, I have mapped the spatial variation throughout the Barents Sea. I have chosen to focus on the time period 2004- 2009, a period that was characterized by heating water masses and declining sea ice coverage in the Barents Sea. The analyses indicate that the fish community has a relatively low vulnerability in the central and south-western parts of the Barents Sea. However, many of the species found there are also fishery-sensitive. Further to the north and east, the community vulnerability appears to be higher due to lower functional diversity and redundancy. The analyses also show that fish that traditionally are found further south moved northwards. This is interpreted as a sign of borealization, which likely occurred due to a heating of the water masses. This pattern is particularly eminent in the northern and north-eastern parts of the Barents Sea, where commercially attractive species establish that are also sensitive to fishing. Since the ecosystem in these northern areas can be vulnerable, and since it is very little studied, cautiousness is required. Future studies that focus on the species’ life histories and functional roles will enhance our understanding of the ecosystem vulnerability.