Foraging, reproduction and survival of the zooplanktivorous seabird Little Auk (Alle alle) in the Arctic in relation to climatic and environmental variability 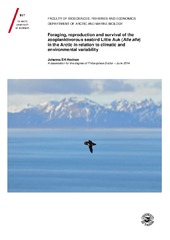 The ability of individuals to acquire and store energy for life-history traits such as reproduction and survival, is finite. This demands prioritizing some traits at the expense of other traits. Which traits to prioritize, depends on the life-history strategy of a species. ‘Slow’-living species, in contrast to ‘fast’-living species, mature late, produce small broods, have low extrinsic mortality and high life expectancy. They tend to allocate resources cautiously to current reproduction, thereby enhancing their survival and potential for future reproduction. Many seabird species employ the slow-living life-history strategy. In order to assess the effects of predicted future climate change on seabird populations, it is important to understand how life-history traits, such as reproduction and survival, are influenced by climatic and environmental variability. The aim of this thesis was to assess the effects of climatic and environmental variability on foraging (i.e. energy acquisition), reproduction and survival of the little auk (Alle alle), the most abundant seabird species breeding in the Arctic. It is in the Arctic regions, where the effects of global climate change are expected to be strongest. Data on oceanographic conditions, foraging trip durations, chick provisioning rates, chick diet, chick fledging success and adult survival was collected on Bjørnøya, a small island in the western Barents Sea, and at three colonies (Isfjorden, Kongsfjorden and Magdalenefjorden) on the western coast of Spitsbergen, Svalbard during 2006-2013. The study area is influenced by both warm, Atlantic and cold, Arctic water masses. The results show that little auk adults preferred to forage in cold water masses at the shelf-sea area, but that oceanographic conditions did not influence their foraging trip durations or chick provisioning rates. On the other hand, the number of good quality prey items delivered daily to a chick correlated negatively with ocean temperature, and both chick fledging success and adult survival was higher when ocean temperature was lower. The higher fledging and survival probabilities were most likely due to higher availability of good quality prey in the little auk’s foraging grounds. Indeed, both these life-history traits seemed highly responsive to changes in environment. High sensitivity indicates that in the future, when Arctic warming is expected to continue and favoured Arctic zooplankton is gradually replaced with Atlantic zooplankton, little auk populations are likely to decrease substantially. This in turn may influence the dynamics of the entire Arctic food web, in which little auks play an important role.