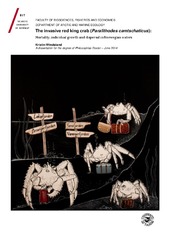 To improve local economy, the red king crab (Paralithodes camtschaticus) was introduced to the Barents Sea by Soviet scientists in the 1960s. Adapting well to the new environment, the growing population gradually invaded new areas along the coast of northern Norway. The red king crab has become a valuable marine resource but as an introduced species, it is also a potential threat to the ecosystem. To meet the management goals, more knowledge about the growth, mortality and dispersal of the species is essential. This thesis attempts to provide this knowledge. In paper I, we developed Bayesian hierarchical models to estimate growth parameters of the von Bertalanffy growth function using tag-recapture data. Allowing for individual variability led to increased precision in estimated lengths and to more realistic values for the growth parameters. The length-at-relative age of small males were overestimated, while those of small females were not. This is believed to be due to differences in growth patterns after maturity. In paper II, we explored the dispersal behaviour and extent of dispersal of red king crab in Norwegian waters. The results indicated that the range expansion of this species is a result of both the existence of long-distance dispersers and time-dependent slow migration by short distance-dispersers and that there is a substantial dispersal of crabs out of the quota-regulated area. In paper III, estimates of annual total mortality were calculated using length-converted catch curves in three time-periods that represented different levels of exploitation. Natural mortality was estimated using a linear regression of total mortality and exploitation rate and by using indirect methods based on life-history parameters. The steady increase in total mortality of males is consistent with the increase in exploitation level while the increase in female mortality is surprising. The estimates of natural mortality ranged from 0.23-0.44 year-1; the larger values are probably an overestimate due to unaccounted bycatch mortality while the lower ones are consistent with life-expectancy.