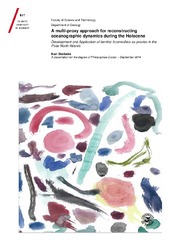 Two sediment cores and several sediment surface samples have been retrieved in order to develop and apply benthic foraminifera as proxies in the Polar North Atlantic. The purpose of the surface samples was to develop the Mg/Ca method for cold water environments, as this has been proven a valuable paleo-thermometer for several marine environments. This was done for three species of Benthic foraminifera: I. helenae/norcrossi, B. frigida and N. labradorica. A mayor finding in this process was that the different species has deviating calcifying season. This implied that seasonal signals could possibly be reconstructed in paleo-records. By using these and faunal assemblages of benthic foraminifera, the two sediment cores from Kongsfjorden, Svalbard and western Barents Sea were studied in order to reconstruct past oceanographic dynamics. These indicated how the inflow of Atlantic Water has varied during the Holocene, and correlated fluctuations out on the shelf with fluctuations closer to the coast. Also, the newly developed Mg/Ca temperature calibrations allowed for reconstructions of different water masses; hence the interplay between the warm, salty Atlantic Water and the cool fresher Arctic Water could be studied. One interesting observation was that increased inflow of Atlantic Water after AD 1750 appeared to result in increased melting along the coast of Spitsbergen, as the Arctic Water became cooler and fresher. Toward modern time all temperature records indicate enhanced warming.