Cyclically outbreaking geometrid moths in sub-arctic mountain birch forest: the organization and impacts of their interactions with animal communities 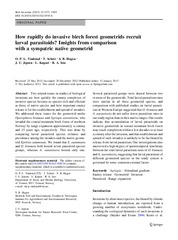