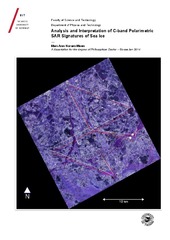 Operational sea ice charts are currently produced manually, an inefficient process resulting in subjective ice charts. Hence, there is a need for automating this procedure. This thesis investigates how polarimetric microwave radar signatures relate to the physical properties of sea ice, and how these signatures may contribute to the development of robust automatic algorithms. Our analyses are based on polarimetric space-borne synthetic aperture radar (SAR) scenes co- with in-situ data obtained north of Svalbard in April 2011. The thesis consists of three papers. The first paper investigated the performance of a feature based automatic segmentation algorithm and compared it to two manual drawn ice charts. The analysis revealed big discrepancies between the ice charts and demonstrated benefits of incorporating polarimetric information in sea ice charting. The objective of the second paper was to explore the transferability of information from one scene to another. Three overlapping scenes from consecutive days were automatically segmented. Utilising one scene as reference, two strategies for labelling the other scenes were explored. The analysis showed that under stable environmental conditions and an incidence angle difference of ∼ 7◦ between the reference scene and the test scene, the results were reasonable. In the third paper we investigated the classification potential of 44 polarimetric features. Ground-truth pixels were manually selected and input to an automatic feature selection process. The feature subsets were input to classifier and evaluated based on the number of correctly classified pixels. The best feature subset included six features. These achieved a classification accuracy of 70%, reflecting the complexity of the scene