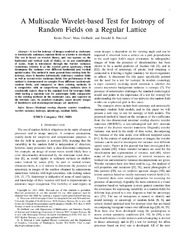 article.pdf (4.335Mb)
This is the accepted manuscript version of the article. Published version available at IEEE TRANSACTIONS ON IMAGE PROCESSING, 2015, VOL. 24, NO. 2
(c) 2015 IEEE. Personal use of this material is permitted. Permission from IEEE must be obtained for all other users, including reprinting/ republishing this material for advertising or promotional purposes, creating new collective works for resale or redistribution to servers or lists, or reuse of any copyrighted components of this work in other works. (PDF)

A test for isotropy of images modeled as stationary or intrinsically stationary random fields on a lattice is developed. The test is based on wavelet theory, and can operate on the horizontal and vertical scale of choice, or on any combination of scales. Scale is introduced through the wavelet variances (sometimes referred to as the wavelet power spectrum), which decompose the variance over different horizontal and vertical spatial scales. The method is more general than existing tests for isotropy, since it handles intrinsically stationary random fields as well as second-order stationary fields. The performance of the method is demonstrated on samples from different (an)isotropic random fields, and compared to three existing methods. It is competitive with or outperforms existing methods since it consistently rejects close to the nominal level for isotropic fields while having a rejection rate for anisotropic fields comparable to the existing methods in the stationary case, and superior in the intrinsic case. As practical examples, paper density images of handsheets and mammogram images are analyzed.