Antecedents and consequences of word of mouth - Consumer evaluation context, individualism, personality and defense of companies 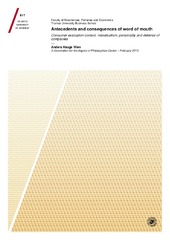 People often share word of mouth (WOM) with their friends, family, and colleagues, and they increasingly also share WOM with strangers through various Internet channels. Since WOM has been found to have an important impact on consumer behavior, businesses worldwide are eager to understand the intricacies of the phenomenon. In particular, businesses are interested in understanding how positive WOM can be stimulated and how negative WOM can be stopped. This dissertation presents four papers that extend the current knowledge on these two issues. The first paper tests the effects of perceived quality and satisfaction on positive WOM intentions in both transaction-specific and cumulative evaluative contexts. Results reveal that different factors drive positive WOM intentions, depending on the context of the study. When consumers’ evaluations are related to a specific transaction, perceived quality is the dominating predictor of positive WOM intentions. When the evaluations are cumulative, satisfaction is the dominating predictor of positive WOM intentions. The second paper examines the relationship between individualism and WOM and factors moderating this relationship. The results reveal that high-individualism consumers are more willing than low-individualism consumers to transmit WOM in relation to satisfactory (versus unsatisfactory) consumption experiences, when WOM is unsolicited (versus solicited) and when the context involves high perceived social risk (versus low perceived social risk). These moderating effects may indicate that self-enhancement is the underlying motive in the relationship between individualism and WOM. The third paper tests a model of personality trait predictors of WOM tendency. The model includes two situational personality traits: social and personal consumer confidence, and two fundamental personality traits: extraversion and neuroticism. The results show that higher levels of extraversion result in greater social consumer confidence, which again has a positive effect on WOM tendency. Moreover, higher levels of neuroticism result in lower personal consumer confidence, which again has a negative effect on the tendency to engage in WOM. The results also show that social consumer confidence partially mediates the relationship between extraversion and WOM, whereas personal consumer confidence fully mediates the relationship between neuroticism and WOM. The fourth paper explores consumer responses to negative WOM on the Internet. The objective was to test an a priori belief that many consumers defend companies in response to an initial negative WOM utterance. Results of a netnographic study confirm that the online defense phenomenon does exist. A typology of six defensive styles (advocating, justifying, vouching, stalling, trivializing, and doubting) was developed and the characteristics of each defense described. Furthermore, factors influencing consumers’ choices of defense styles were identified. The study also highlights the different outcomes of the various defense styles and illustrates that this consumer phenomenon can be effective in preventing the spread of negative WOM or in mitigating its impact.