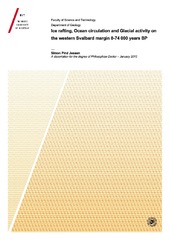 The thesis builds on 11 sediment cores from c. 600 to 1900 m water depth from the continental slope west of Svalbard and one core from the Barents Sea shelf. Together, the cores cover the last 74,000 years. The primary goal was to gain a better insight in ocean circulation and glacial activity in a climatic context on glacial-interglacial and millennial time scales. The main parameters studied are ice rafted detritus (IRD) - i.e. sand grains transported out to sea by icebergs or sea ice, grain-size of sortable silt (10-63 micron), which measures the strength of bottom currents, and the magnetic susceptibility of sediments, a proxy for sediment provenance and current activity. The main findings are: - The Svalbard-Barents Sea ice sheet reached the shelf break before 24,000 years BP, when it was at its maximum size. The timing of maximum glaciation is monitored by series of mass transport deposits along the entire slope. The timing is at least 3000 years earlier than previously reconstructed. - The ice sheet was at its largest size for a relatively short time. The initial glacial retreat occurred no later than 21,000 years BP and probably started already at 24,000 years BP via a massive iceberg discharge from an active ice stream in the Storfjorden Trough south of Spitsbergen. - The millennial scale activity of the Svalbard Barents Sea ice sheet was closely linked to climate change, with a more actively calving ice sheet during warm climate intervals and a stable, probably growing ice sheet during cold climate intervals. - The bottom current strength oscillated in phase with millennial scale climate, probably reflecting changing deep water production in the Greenland Sea gyre. - Warm Atlantic water was always present on the slope, but occasionally submerged under a cover of fresh and cold Polar water.