Insights into bacterial protection and survival. A study of three enzymes from cold-adapted bacteria 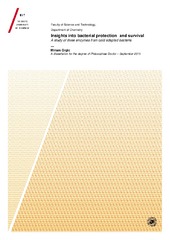 Bacteria are the most abundant organisms and can be found in different habitats, from polar regions, deserts and volcanoes, deep ocean trenches to the upper atmosphere. In all these environments, they are exposed to various chemical hazards, such as antibacterial chemicals (antibiotics) produced by other organisms that are found in the same habitat. In addition, they are exposed to threats from infection by bacteriophages. In order to protect themselves, bacteria have evolved several mechanisms towards avoiding antibiotics and phage infection. In this work, enzymes involved in these protection mechanisms have been attempted characterized both functionally and structurally. Specifically two DNA modifying enzymes have been studied. They are involved in bacterial protection from phages, namely the type II restriction enzyme DpnI and the C5-DNA-MTase ParI, both originating from the psychrophilic bacterium Psychrobacter arcticus. The third enzyme that has been investigated is a metallo-β-lactamase (ALI-1) from the cold adapted marine bacterium Aliivibrio salmonicida. Since all these enzymes originate from organisms adapted to a cold environment, the presence of cold adapted enzyme features like heat lability and high activity at low temperature, were investigated. In Manuscript I and in Manuscript III we partially characterized the type II restriction enzyme DpnI and the C5-DNA-MTase ParI. In addition to being important for the bacterial cell, these types of enzymes are valuable in several molecular biology techniques and the development of more efficient enzymes is necessary in terms of reducing cost and increasing efficiency. Due to their characteristics such as higher activity at lower temperatures and heat lability cold adapted enzymes became very attractive targets. Both DpnI and ParI were recombinantly expressed, but with some difficulties, that were overcome by usage of specialized E. coli strains. Both enzymes were partially characterize with regards to function, DpnI showed activity in vitro, while MTase was shown to have methylating activity in vivo. One of the mechanisms in antibiotic resistance is the acquirement and development of β-lactamases, enzymes that can cleave the amide bond in the β-lactam ring, a common structure in all β-lactam antibiotics, and thus inactivate it. This presents a huge problem in usage of β-lactam antibiotics, which are widely used against bacterial infections in both humans and animals. In Paper II, the metallo-β-lactamase ALI-1, from the cold adapted marine bacterium Aliivibrio salmonicida, was characterised. When compared to a mesophilic counterpart (VIM-1 from Pseudomonas aeruginosa) it was shown to be adapted to its natural habitat, in terms of being more active at lower temperatures and in higher salt concentrations. In addition, in this work it was found that the gene encoding ALI-1 is present in environmental bacterial samples. This could point towards a broader role for ALI-1, such as in regulating quorum sensing signalling in bacteria.

Paper II of this thesis is not available in Munin.
Properties and distribution of a metallo-β-lactamase (ALI-1) from the fish pathogen Aliivibrio salmonicida LFI1238. Kristiansen Anders; Grgic Miriam; Altermark Bjørn; Leiros Ingar. Available in Journal of Antimicrobial Chemotherapy, 2014, vol. 70, issue 3