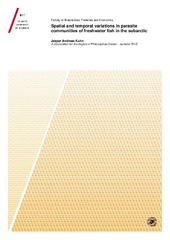 Parasite communities are complicated systems believed to be affected by multiple ecological and environmental factors, both in time and space. These communities might be disrupted by anthropogenic host introductions which unfortunately appear to be a common practice e.g. in freshwater fish management. By addressing parasite occurrences in three of the most common freshwater fish species in subarctic lakes of Northern Europe; brown trout (Salmo trutta), Arctic charr (Salvelinus alpinus) and three-spined stickleback (Gasterosteus aculeatus), we sought to increase the knowledge regarding how these complicated systems vary and how they might be affected by a possible host introduction. The main aim of this PhD thesis was therefore to study the spatial and temporal differences and changes in parasite occurrences in freshwater fish from northern Norway, and also to explore the importance of three-spined stickleback as a tentative transmission host for salmonid fishes.
By comparing the parasite community of an introduced three-spined stickleback population in comparison with the nearby source population, an overall high similarity was observed between the two systems. This suggests that parasite occurrences can be expected to be similar in locally separated ecosystems, as long as important environmental variables are similar. Additionally, a high degree of successful parasite introductions and establishment suggests that concomitant parasite introductions should be anticipated when new host species are introduced into an ecosystem on a small spatial scale. In addition to introducing new parasite species, introduction of a host species may also create additional host links in the food web of the recipient ecosystem which possibly aid other parasite species, such as trophically transmitted generalist parasites, to increase in occurrence.
An introduced host species might additionally function as a new prey item with potential importance to the parasite infra- and component populations of piscivorous fish species in the recipient ecosystem. By analyzing the importance of available prey fish for the transmission of Diphyllobothrium spp. to piscivorous brown trout, it was observed that the Diphyllobothrium infections increased in trout when sympatric fish species were present. Particularly high infections occurred when brown trout had the opportunity to prey on threespined stickleback. These findings indicate that by introducing a prey fish, which feeds extensively on the first intermediate host of a trophically transmitted parasite species, into an ecosystem with a piscivorous fish population, in which there is almost absent utilization of that intermediate host, underused transmission links in the food web can be bypassed. Consequently, parasite transmission may flow through the newly introduced trophical node (the fish prey) causing an increase in parasite host links and in the occurrence of the parasite species.
Investigating within-ecosystem variation in the parasite infracommunity composition of a host species further helped to understand the impact that host introduction and manipulation might have on an ecosystem. Overall stability was observed when exploring long-term temporal and spatial variation in the intestinal parasite infracommunities of an Arctic charr population. Long-term temporal variation was absent, indicating that the infracommunities were in an overall steady state, and spatial stability was present in the form of similar infracommunity composition between individual charr. Helminth endoparasite communities of freshwater fish are considered inherently unstable, as no regulating factors are usually identified. Observed stability likely comes from environmentally stable biotic and abiotic factors. An unregulated parasite community would likely experience large changes following a perturbation such as the introduction of a new host species and associated parasites. This again stress the severity of a host introduction.
Even though parasite communities are complex ecological entities, the present study demonstrate that a great degree of similarity, predictability and stability can be observed in parasite communities of freshwater fish in northern Norway. In addition, three-spined stickleback was found as expected to play an important role in the occurrences of various parasite species emphasizing the ecological importance of this fish species. Its high impact on the structure and functionality of ecological food webs and parasite communities therefore strongly advises to discourage the practice of introducing this host species.