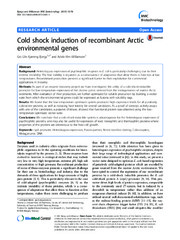 Background: Heterologous expression of psychrophilic enzymes in E. coli is particularly challenging due to their intrinsic instability. The low stability is regarded as a consequence of adaptation that allow them to function at low temperatures. Recombinant production presents a significant barrier to their exploitation for commercial applications in industry.

Methods: As part of an enzyme discovery project we have investigated the utility of a cold-shock inducible promoter for low-temperature expression of five diverse genes derived from the metagenomes of marine Arctic sediments. After evaluation of their production, we further optimized for soluble production by building a vector suite from which the environmental genes could be expressed as fusions with solubility tags.

Results: We found that the low-temperature optimized system produced high expression levels for all putatively cold-active proteins, as well as reducing host toxicity for several candidates. As a proof of concept, activity assays with one of the candidates, a putative chitinase, showed that functional protein was obtained using the lowtemperature optimized vector suite.

Conclusions: We conclude that a cold-shock inducible system is advantageous for the heterologous expression of psychrophilic proteins, and may also be useful for expression of toxic mesophilic and thermophilic proteins where properties of the proteins are deleterious to the host cell growth.