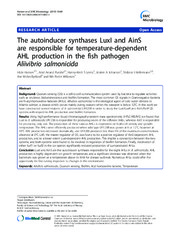 Background: Quorum sensing (QS) is a cell-to-cell communication system used by bacteria to regulate activities such as virulence, bioluminescence and biofilm formation. The most common QS signals in Gram-negative bacteria are N-acyl-homoserine lactones (AHLs). Aliivibrio salmonicida is the etiological agent of cold water vibriosis in Atlantic salmon, a disease which occurs mainly during seasons when the seawater is below 12°C. In this work we have constructed several mutants of A. salmonicida LFI1238 in order to study the LuxI/LuxR and AinS/AinR QS systems with respect to AHL production and biofilm formation.

Results: Using high-performance liquid chromatography-tandem mass spectrometry (HPLC-MS/MS) we found that LuxI in A. salmonicida LFI1238 is responsible for producing seven of the different AHLs, whereas AinS is responsible for producing only one. The production of these various AHLs is dependent on both cell density and growth temperature. The AHLs were efficiently produced when wild type LFI1238 was grown at 6 or 12°C, however at 16°C AHL production decreased dramatically, and LFI1238 produced less than 5% of the maximum concentrations observed at 6°C. LitR, the master regulator of QS, was found to be a positive regulator of AinS-dependent AHL production, and to a lesser extent LuxI-dependent AHL production. This implies a connection between the two systems, and both systems were found to be involved in regulation of biofilm formation. Finally, inactivation of either luxR1 or luxR2 in the lux operon significantly reduced production of LuxI-produced AHLs.

Conclusion: LuxI and AinS are the autoinducer synthases responsible for the eight AHLs in A. salmonicida. AHL production is highly dependent on growth temperature, and a significant decrease was observed when the bacterium was grown at a temperature above its limit for disease outbreak. Numerous AHLs could offer the opportunity for fine-tuning responses to changes in the environment.