The immediate global responses of Aliivibrio salmonicida to iron limitations 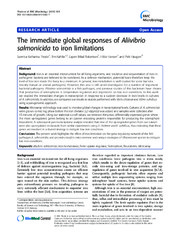 Background: Iron is an essential micronutrient for all living organisms, and virulence and sequestration of iron in pathogenic bacteria are believed to be correlated. As a defence mechanism, potential hosts therefore keep the level of free iron inside the body to a minimum. In general, iron metabolism is well studied for some bacteria (mostly human or animal pathogens). However, this area is still under-investigated for a number of important bacterial pathogens. Aliivibrio salmonicida is a fish pathogen, and previous studies of this bacterium have shown that production of siderophores is temperature regulated and dependent on low iron conditions. In this work we studied the immediate changes in transcription in response to a sudden decrease in iron levels in cultures of A. salmonicida. In addition, we compared our results to studies performed with Vibrio cholerae and Vibrio vulnificus using a pan-genomic approach.

Results: Microarray technology was used to monitor global changes in transcriptional levels. Cultures of A. salmonicida were grown to mid log phase before the iron chelator 2,2’-dipyridyl was added and samples were collected after 15 minutes of growth. Using our statistical cut-off values, we retrieved thirty-two differentially expressed genes where the most up-regulated genes belong to an operon encoding proteins responsible for producing the siderophore bisucaberin. A subsequent pan-transcriptome analysis revealed that nine of the up-regulated genes from our dataset were also up-regulated in datasets from similar experiments using V. cholerae and V. vulnificus, thus indicating that these genes are involved in a shared strategy to mitigate low iron conditions.

Conclusions: The present work highlights the effect of iron limitation on the gene regulatory network of the fish pathogen A. salmonicida, and provides insights into common and unique strategies of Vibrionaceae species to mitigate low iron conditions.