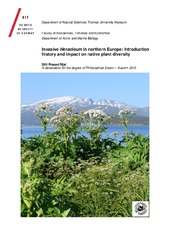 Exotic invasive giant hogweeds are infamous in Europe for their ecological and economic damage; however, the magnitude of their impact on plant diversity has not yet been fully explored. In addition, uncertainties in their source and route of introduction impede management interventions. In such cases, molecular markers may bridge gaps between invasion history and management by providing insight into the complex history of biological invasions. This thesis developed a microsatellite library for hogweeds, reconstructed the introduction history and evaluated the impact of H. persicum on Norwegian plant diversity. The microsatellite markers clearly discriminated the genetic structure of exotic invasive giant hogweeds, a native hogweed, and their invasive hybrids. Heracleum persicum was introduced twice from Iran to Denmark and England. English populations subsequently colonized Finland. In contrast to the contemporary hypothesis of an English origin of Norwegian populations, Finland appeared as a more likely source. The cover of H. persicum had a strong negative effect on the native cover. The invaded plots had on average nearly two native species less than the non-invaded plots. Plant communities containing H. persicum appeared less susceptible to further invasion. Overall, the impact of H. persicum on native plant diversity outweighs the invasion resistance it offers. In conclusion, the strong negative impact of H. persicum on the Norwegian plant diversity justifies the need for the urgent management interventions to control and eradicate H. persicum. High invasiveness in Norwegian populations of H. persicum despite low levels of genetic diversity indicates that even a small founder population may cause high impact. The developed set of microsatellite markers may serve as an important genetic resource for understanding taxonomy, population genetics and phylogeny of giant hogweeds and their hybrids, which in turn, are expected to contribute to biodiversity conservation by invasive species management.