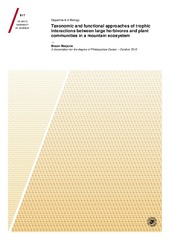 Given the key role of large herbivores on species and functional plant diversity, we aimed at better understanding the relationship between herbivory and plant communities mainly at a fine-scale, in order to reconcile objectives of population management and plant conservation. For this purpose, we used both taxonomic and functional approaches, and studied interactions at the inter- and intra-specific levels. We combined information coming from three databases: (1) diet data from DNA-metabarcoding applied on chamois (Rupicapra rupicapra), roe deer (Capreolus capreolus) and mouflon (Ovis gmelini musimon) faeces from the Bauges Massif, (2) characteristics of plant communities (plant composition, biomass, phenology), (3) plant functional traits. Analyses of intra-specific variability of the three large herbivores allowed us to upscale the niche variation hypothesis (NVH) of Van Valen from the intra- to the inter-specific level, i.e. we observed a positive relationship between the species niche breadth and among-individual variation. Then, based on two chamois subpopulations living in pastures, one living in sympatry with the mouflon and the other living in allopatry, we revealed the absence of negative effects of the introduced mouflon population on native chamois population diet, both for the taxonomic and functional dietary niche. Analyses of diet selection criteria allowed us to highlight differences in choice criteria between chamois and mouflon in some seasons, which helped to partially explain the partial taxonomic and functional niche partitioning of the two species. Furthermore, the proposed scenario of the evolution of diet selection over the year for both species were consistent with ungulate-specific morpho-physiological features. Finally, contrary to the literature where no studies could discriminate the direct and indirect effects of functional traits on diet selection because of correlations, we used path analyses, which allowed us to show that in most cases, biomechanical traits had a direct effect on diet choices, whereas chemical traits had indirect effects. Furthermore, from a methodological point of view, we advised to use nitrogen fecal indices only to study the evolution of species-specific and location-specific population long-term diet quality, but not to compare diet quality between species, nor to study slight fluctuations at the intra-seasonal level. The complementarity of the approaches allowed us to better account for the structuration of herbivore communities, which should help to better assess the actual state and the evolution of relationships among individuals, species and their environment.