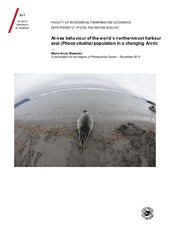 The earth is experiencing warming at a rate that challenges the adaptive capacities of many animal species. Because marine mammals can integrate and reflect ecological variation across various spatial and temporal scales, they are prime sentinels of marine ecosystem change. This thesis explores movement patterns and foraging behaviour, and the ontogeny of these behaviours, in harbour seals (Phoca vitulina) from the world’s northernmost population in Svalbard, Norway, in the context of local environmental conditions. Sixty harbour seals, including pup, juvenile and adult age classes, were instrumented near the main breeding site for this population on Forlandsøyene, west of Prins Karl Forland in 2009 and 2010 with Conductivity-Temperature-Depth Satellite-Relay-Data-loggers (CTD-SRDLs) for the adults and juveniles and smaller Satellite-Relay-Data-loggers (SRDLs) for the pups. The seals showed a strong preference for the west side of the archipelago, where they stayed within 50 km of the coast on the shelf, seldom entering the fjord systems especially in the winter. Some pups ventured out of the west coast shelf area occasionally, with individuals that explored the Bjørnøya region or the east coast of Spitsbergen. The transition from maternal dependence to independent foraging occurred at a young age and was quite abrupt. Marked changes in movement and diving patterns were observed when the pups were approximately 50 days of age. The core area occupied by the seals is characterized by complex oceanographic conditions and intense mixing between masses of Arctic Water and Atlantic Water from the West Spitsbergen Current (WSC). The adult and juvenile seals diving behaviour had a marked seasonality and was influenced by local wind-driven upwelling phenomenon. During upwelling events, the West Spitsbergen Shelf is flooded by Atlantic Water masses, which were specifically targeted by the seals. Presumably these water masses brought Atlantic fish species close to shore and within the seals’ foraging depth-range. However, no strong correlation between dive parameters and upwelling events was found for the pups. This study strongly suggests that the influence of the WSC on the western part of the Svalbard Archipelago is a determining factor for the presence of this harbour seal population in the High Arctic. The predicted warming will likely favour an increased abundance and a broader distribution of harbour seals through a borealization of the marine ecosystem in the coastal areas of the Svalbard Archipelago.

Paper III of this thesis is not available in Munin:
Blanchet, M.-A. et al. Harbor seal ontogeny of behavior. Making it through the first year: Ontogeny of movement and diving behavior in harbor seals from Svalbard, Norway. (Manuscript)