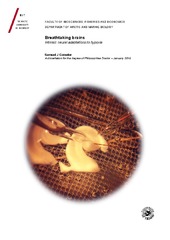 To maintain and restore the membrane potential that is crucial for normal function of neurons, the brain requires a constant and high energy supply. This supply is mainly covered by oxidative metabolism. When oxygen supply is impaired on a cellular level (hypoxia), such as in the case of stroke, neural energy levels become inadequate to maintain ion balance, leading to excessive ion flux and ultimately to neural death. Despite the brain’s high vulnerability to hypoxia, a number of animals are exposed to and survive hypoxia on a regular basis. Consequently, these animals must possess intrinsic adaptations to hypoxia. An overview of some of these neural adaptations is presented here, with focus on two diving animal species, the hooded seal (Cystophora cristata) and the eider duck (Somateria molissima). To cover their energy requirements, mammalian neurons generally seem to aerobically metabolize lactate provided by astrocytes. Energy metabolism in the seal brain, however, appears to be organized differently with regard to the roles of astrocytes and neurons, possibly reducing oxidative stress in neurons and enhancing neuronal anaerobic capacity during hypoxia. In paper I we investigated the role of glucose and lactate as fuel sources in hooded seal neurons. We confirmed that spontaneous neuronal activity is maintained in hypoxia, both in the presence of glucose, but also in lactate and aglycemia. While the first implies an increased anaerobic capacity, the latter is possibly due to the enhanced neural glycogen reserves that we found, which are also found in other hypoxia-tolerant species. To cope with the reduced energy available during hypoxia, many hypoxia tolerant species reduce brain activity to decrease energy demand. In accordance with this strategy, some neurons in the hooded seal and eider duck brain display a shutdown response to hypoxia. In paper II we showed that KATP-channels are present in the eider duck brain and may contribute to reduce neuronal activity during hypoxia. In paper III we investigated the effect of hypoxia on neuronal communication in the hooded seal. We showed that hippocampal slices in vitro are able to maintain synaptic transmission for at least 3 h in severe hypoxia. We found attenuated paired pulse facilitation in the seal hippocampus and suggest that this may reflect an altered presynaptic calcium regulation in the seal neurons to mitigate the detrimental effects of excessive calcium influx. The presented results contribute to our understanding of intrinsic neural adaptations in hypoxia tolerant animals. The underlying mechanisms seem to contribute to a reduction in neural energy demand by attenuating activity, maintain energy balance by adapting metabolism, and employ various molecular mechanisms to protect the brain from hypoxic damage.

Paper III of this thesis is as manuscript version not available in Munin. The published version is available in Neuroscience 334:39-46
Geiseler SJ, Larson J, Folkow LP (2016). Synaptic transmission despite hypoxia in hippocampal slices of the deep‐diving hooded seal.