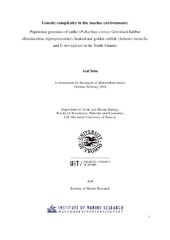 In this work, I investigated genetic complexity in four commercially exploited species from the North Atlantic: saithe (Pollachius virens L.), Greenland halibut (Reinhardtius hippoglossoides), and beaked and golden redfish (Sebastes mentella and S. norvegicus). The results were used 1) to assess the consistency between current management units and units identified by results based on genetic data for each species, and 2) to assess the efficiency of SNP data compared to conventional markers in studying population genomics. Panels of nuclear genomic markers, including single nucleotide polymorphisms (SNPs) and microsatellites, derived from modern genomic approaches, and data on species life history traits, were analyzed to explore genetic complexity within these highly migratory and continuously distributed species. The investigation reveals biologically distinct populations within each of these species. Four genetic clusters of saithe and two clusters of Greenland halibut were found in the North Atlantic. For beaked redfish, results using both the genome-wide SNP and microsatellite data supported one group (‘shallow’) throughout the North Atlantic and a second group (‘deep’) in the central North Atlantic and Canadian waters. A localized group (‘slope’) of beaked redfish was identified in Greenland and Icelandic waters. Microsatellite DNA supported three unrecognized cryptic species of golden redfish in Greenland and nearby waters. Genetic isolation in golden and beaked redfish was greater than in saithe and Greenland halibut, which is possibly associated with unique life history features of redfishes. The results indicate a correlation between genetic differentiation and life history differences in the studied species. These findings imply that distinct genetic heterogeneity can exist in different marine species and may be influenced by different biotic and abiotic factors. The results highlight that in most cases the current management units of these species are comprised of multiple biological populations. The new definition of gene pools may serve to define biologically meaningful management units to ensure their sustainable exploitation and preserve evolutionary legacies. This study provides the first SNP-based population genomic investigation in saithe, Greenland halibut and beaked redfish. Comparative analyses of SNP and conventional marker systems demonstrate a higher resolution for SNP markers. Results from genome-wide SNP data identified the three genetic groups of beaked redfish from a much smaller sample set, and the estimated genetic differentiation was much greater than that found by other marker. Both in beaked redfish and Greenland halibut a sub-set of outlier SNPs were identified, implying possible signals of selection in these loci or nearby genomic sites. These outliers may provide increased power in population assignment of the species. The present work illustrates outstanding opportunities of SNP marker system for investigating population genomics of non-model organisms.