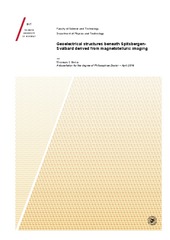 In this thesis a series of geophysical surveys are carried out on the geologically important and remote Svalbard using magnetotelluric imaging, to constrain better the geology particularly defining geothermal resources. Magnetotellurics (MT) relays on natural source time-varying electric and magnetic field data measured at the earth’s surface in order to derive the subsurface resistivity structure. As part of the thesis, broadband MT data are collected in central and northwestern Spitsbergen in the period range between 0.003 - 1000 s from nearly 80 stations distributed along five profiles of 6 - 42 km long. The new MT data have brought significant contributions to extend the existing crustal scale geological knowledge, which mostly inferred from surficial, seismic and gravity studies in the past. From the MT data, we derived 2D and 3D resistivity models for selected areas and enabled to image the structure of the near surface bedrock geology and crustal scale architecture. The 2D and 3D inversion results indicated reasonable agreement with previous geological data, models and well reflected tectonic histories. Within the Central Tertiary Basin a higher frequency of fractures, localized faults and thick intrusive dyke swarms are resolved in the sub-horizontal and less deformed Mesozoic plat- form cover deposits. The tectonic history of the Paleocene-Eocene fold-thrust belt structure in northwest Svalbard is well indicated in the MT data from the Brøgger peninsula as a deformed architecture. The MT data from this section imaged elegantly an interplay between repeated basement-involved fold-thrust structures and successive down-dropped strata along steeply dipping oblique-normal faults that created a horst/ridge and graben/depression systems. MT is sensitive to subsurface geothermal attributes, such as fluid and heat migration zones. In this respect, the new MT data have proposed locations that may favour technologically accessible geothermal potentials.