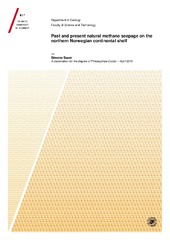 This thesis represents an integrated research effort to understand past and present methane cycling on the northern Norwegian margin. Active hydrocarbon seeps in the Hola trough on the Vesterålen continental shelf are found to be fed predominantly by thermogenic methane (and ethane, propane and butane). Most likely derived from Late Jurassic to Early Cretaceous source rocks, these gaseous hydrocarbons migrate along major unconformities between the basement and the overlying Mesozoic sedimentary rocks. Most of the ascending methane is consumed by anaerobic oxidation of methane (AOM) at the sulphate methane transition (SMT) within the subsurface sediments. A comparison of the carbon cycling in the surface sediments of the Vesterålen shelf seep site and organic rich sediments of a northern Norwegian fjord revealed distinctly different organic carbon sources, accumulation rates and turnover processes. The seep site is mainly influenced by carbon input via the rise of thermogenic methane rich-fluids, whereas the fjord site is completely dominated by marine organic matter deposition originating from primary production in the water column resulting in higher rates of organoclastic sulphate reduction and methanogenesis. The study of methane-derived authigenic carbonates (MDACs) from the Hola seep site provided insight into formation environment and source fluids. The most important information derived from the MDACs are the temporal constraints of methane escape inferred from U-Th dating. Based on our present knowledge, methane seepage in the Hola trough started at least 11 ka ago, probably even slightly before. It seems likely that strongest events of past methane seepage and carbonate formation occurred around 10, 4 and 2 ka BP. The events may be tentatively correlated to seismicity events related to isostatic rebound of the lithospheric crust after retreat and melting of the Scandinavian ice sheet and local/regional earthquakes.