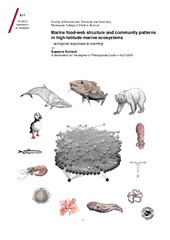 This PhD deals with spatial and temporal community patterns in Barents Sea marine food webs and benthic communities in Svalbard. A main aim of this PhD project has been to study how community and food-web structure changes along environmental and climatic gradients, and to elucidate how species respond to climate warming in the Arctic. We used network analysis to study how the network of who eats whom in the Barents Sea changes from the boreal, warm-water regions in the southwest to the cold-water, arctic regions in the northeast. We documented differences in the food-web structure across the entire Barents Sea, separating biogeographic food-web regions. Our study provides further evidence that food-web structure is linked to broad-scale environmental gradients through environmental constraints on niche space and environmental filtering of species’ spatial distributions. We also showed that the current climate-driven poleward shift of boreal fish in the Barents Sea affects the arctic food web by increasing its connectivity and decreasing its modularity. Along the rocky shores of Svalbard, we documented a regime shift in the sea-floor communities most likely as a response to warming.