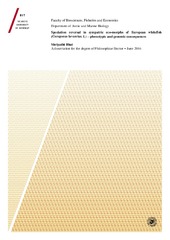 Anthropogenic activities, such as introduction of non-native species, is considered as one of the most significant causes for declining biodiversity, since such introduction may destabilise ecological barriers to gene flow between native populations. In the 1960s a salmonid fish, vendace, was introduced to the upper parts of Pasvik watercourse and during the early 1990s it invaded the entire watercourse, including the lakes studied in this project/thesis. These lakes harbour an eco-morph pair of European whitefish that has diverged in sympatry in post-glacial times. The vendace, being a competitively superior planktivore to the densely rakered eco-morph, relegated this eco-morph from its native pelagic habitat into the non-native littoral habitat, which is mainly occupied by the large sparsely rakered eco-morph. These observations have inspired this PhD thesis to study the phenotypic, genetic, and genomic consequences of the vendace invasion on native sympatric European whitefish eco-morphs. Using neutral microsatellite markers, the study documented that the introduction and invasion of vendace have induced speciation reversal in the eco-morph pair. The comparison of the number of gill rakers from the pre- and post-invasion periods revealed merging of two peaks of distribution of number of gill rakers following the invasion suggesting reduction in discreteness of phenotypes. Population genomic analyses, using genome-wide coverage of SNP markers obtained by sequencing of restriction site associated DNA libraries (RADseq), revealed an unpredicted outcome of speciation reversal at the genomic and functional phenotypic levels. This was attributed to a change in the selective forces during speciation reversal. The introgression patterns at genomic regions of adaptive importance, showed that speciation reversal have unpredictable consequences on introgression. Overall, this PhD study concludes that anthropogenic activities have wide-ranging and stochastic effects for species undergoing speciation reversal.