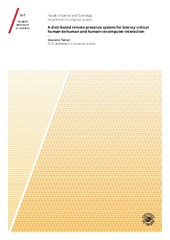 In a computer-based distributed stage performance, such as a theater play or opera, the actors and the audiences are spread among different stages in different locations. Actors in different cities can be on the same virtual stage and perform in front of an audience that can enjoy a whole consistent performance. A distributed stage performance raises a set of challenges both of a principled and of a practical nature. Traditional plays taking place on a single physical stage have a number of characteristics. These include very low delays between actors observing what others are doing, all actors and the audience see all events in the same order, and actors as well as the stage are modified through costumes, props, make-up and light changes. A computer-based system for distributed stage performances has to handle these aspects in principle. In practice, a system for distributed stage performances has to implement a number of functionalities. The actors need a representation of themselves on each of the stages, referred to as a remote presence. The remote presence will represent the actors to a varying degree of accuracy. The virtual remote presence is dressed in a virtual costume. It substitutes, in part or entirely, the costumes and make-up of the actor.This dissertation presents MultiStage, a system for distributed performances. MultiStage has functionalities to detect the state of the stages including possible gestures from actors, distribute the state among the stages, and to create remote presences.