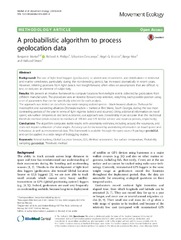 Background: The use of light level loggers (geolocators) to understand movements and distributions in terrestrial and marine vertebrates, particularly during the non-breeding period, has increased dramatically in recent years. However, inferring positions from light data is not straightforward, often relies on assumptions that are difficult to test, or includes an element of subjectivity.

Results: We present an intuitive framework to compute locations from twilight events collected by geolocators from different manufacturers. The procedure uses an iterative forward step selection, weighting each possible position using a set of parameters that can be specifically selected for each analysis. The approach was tested on data from two wide-ranging seabird species - black-browed albatross Thalassarche melanophris and wandering albatross Diomedea exulans – tracked at Bird Island, South Georgia, during the two most contrasting periods of the year in terms of light regimes (solstice and equinox). Using additional information on travel speed, sea surface temperature and land avoidance, our approach was considerably more accurate than the traditional threshold method (errors reduced to medians of 185 km and 145 km for solstice and equinox periods, respectively).

Conclusions: The algorithm computes stable results with uncertainty estimates, including around the equinoxes, and does not require calibration of solar angles. Accuracy can be increased by assimilating information on travel speed and behaviour, as well as environmental data. This framework is available through the open source R package probGLS, and can be applied in a wide range of biologging studies.

Merkel, B. (2019). Migration in seabirds: seasonal structure in space and environment across species, populations and individuals. (Doctoral thesis). https://hdl.handle.net/10037/15239