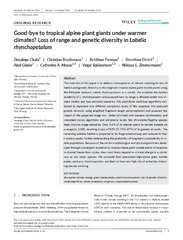 The main aim of this paper is to address consequences of climate warming on loss of habitat and genetic diversity in the enigmatic tropical alpine giant rosette plants using the Ethiopian endemic Lobelia rhynchopetalum as a model. We modeled the habitat suitability of L. rhynchopetalum and assessed how its range is affected under two climate models and four emission scenarios. We used three statistical algorithms calibrated to represent two different complexity levels of the response. We analyzed genetic diversity using amplified fragment length polymorphisms and assessed the impact of the projected range loss. Under all model and scenario combinations and consistent across algorithms and complexity levels, this afro-alpine flagship species faces massive range reduction. Only 3.4% of its habitat seems to remain suitable on average by 2,080, resulting in loss of 82% (CI 75%–87%) of its genetic diversity. The remaining suitable habitat is projected to be fragmented among and reduced to four mountain peaks, further deteriorating the probability of long-term sustainability of viable populations. Because of the similar morphological and physiological traits developed through convergent evolution by tropical alpine giant rosette plants in response to diurnal freeze-thaw cycles, they most likely respond to climate change in a similar way as our study species. We conclude that specialized high-alpine giant rosette plants, such as L. rhynchopetalum, are likely to face very high risk of extinction following climate warming

This article is also published at http://doi.wiley.com/10.1002/ece3.2603
This is an open access article under the terms of the Creative Commons Attribution License, which permits use, distribution and reproduction in any medium, provided the original work is properly cited.