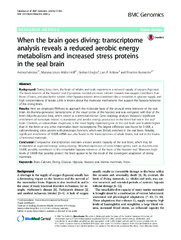 Background: During long dives, the brain of whales and seals experiences a reduced supply of oxygen (hypoxia). The brain neurons of the hooded seal (Cystophora cristata) are more tolerant towards low-oxygen conditions than those of mice, and also better survive other hypoxia-related stress conditions like a reduction in glucose supply and high concentrations of lactate. Little is known about the molecular mechanisms that support the hypoxia tolerance of the diving brain.
Results: Here we employed RNA-seq to approach the molecular basis of the unusual stress tolerance of the seal brain. An Illumina-generated transcriptome of the visual cortex of the hooded seal was compared with that of the ferret (Mustela putorius furo), which served as a terrestrial relative. Gene ontology analyses showed a significant enrichment of transcripts related to translation and aerobic energy production in the ferret but not in the seal brain. Clusterin, an extracellular chaperone, is the most highly expressed gene in the seal brain and fourfold higher than in the ferret or any other mammalian brain transcriptome. The largest difference was found for S100B, a calcium-binding stress protein with pleiotropic function, which was 38-fold enriched in the seal brain. Notably, significant enrichment of S100B mRNA was also found in the transcriptomes of whale brains, but not in the brains of terrestrial mammals.
Conclusion: Comparative transcriptomics indicates a lower aerobic capacity of the seal brain, which may be interpreted as a general energy saving strategy. Elevated expression of stress-related genes, such as clusterin and S100B, possibly contributes to the remarkable hypoxia tolerance of the brain of the hooded seal. Moreover, high levels of S100B that possibly protect the brain appear to be the result of the convergent adaptation of diving mammals.

This is an open access article distributed under the terms of the Creative Commons Attribution License, which permits unrestricted use, distribution, and reproduction in any medium, provided the original author and source are credited.
This article is also available via DOI:10.1186/s12864-016-2892-y