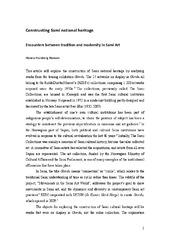 The article explores the construction of Sami national heritage taking works from a touring exhibition, Gierdu, as the object for exploration. The exhibition opened in 2009 displaying 27 artworks from the art collection at RiddoDuottarMuseat in Karasjok in Norway. The exploration is contextualised as an understanding of heritage, tradition and modernity as dynamic concepts dealing with how we interpret and validate the past in the present. Artworks, both categorised as duodji, and dáidda are on display in Gierdu. In the early years of the Sami ethno-political movement, duodji was considered authentic Sami, while dáidda was considered non-Sami. In recent years, both Sami and other scholars have questioned the difference, claiming the relation between tradition and modernity as appropriations, dialogues and encounters rather than oppositions. Through a reading of a selection of works from the exhibition, several appropriations are found. One appropriation is how duodji is institutionalised in the art museum. Another is how Western, modernist art is included in a Sami collection of art. A third appropriation is how contemporary art practices as assemblage reintroduces magic and ritual to the gallery, from which such distractions previously were removed. The most important construction of heritage in Gierdu is the reconstruction of a space important for duodji – operating between the sacred and the profane. The reconstructed space has the same, dynamic qualities, but instead of a space between the sacred and the profane, art in the reconstructed space operates between tradition and modernity.
This article will explore the construction of Sami national heritage by analysing works from the touring exhibition Gierdu. The 27 artworks on display in Gierdu all belong to the RiddoDuottarMuseat’s (RDM’s) collections, comprising 1200 artworks acquired since the early 1970s.11. RDM is an abbreviation of RiddoDuottarMuseat/The Sami Museum Collections. View all notes The collections, previously called The Sami Collections, are housed in Karasjok and was the first Sami cultural institution established in Norway. It opened in 1972 in a modernist building partly designed and decorated by the late Sami artist Iver Jåks (1932–2007).
The establishment of one’s own cultural institutions has been part of indigenous people’s self-determination; to claim the position of subject has been a strategy to counteract the previous objectification in museums and art galleries.22. More about the relation between indigenous people and Western museums and art institutions, see James Clifford, The Predicament of Culture: Twentieth-Century Ethnography, Literature, and Art, Cambridge, MA, 1988, pp. 215–254. View all notes In the Norwegian part of Sápmi, both political and cultural Sami institutions have evolved in response to the cultural revitalisation the last 40 years.33. Paul Pedersen and Asle Høgmo, Sápmi slår tilbake: Samiske revitaliserings- og moderniseringsprosesser i siste generasjon, Kárášjohka, 2012, p. 19. View all notes Initially, The Sami Collections was mainly a museum of Sami cultural history, but one that also collected art. A committee of Sami artists has selected the acquisitions, and artists from all over Sápmi are represented. The art collection, funded by the Norwegian Ministry of Cultural Affairs and the Sami Parliament, is one of many examples of the institutional affirmation that have taken place.
In Sami, the title Gierdu means “connection” or “circle”, which relates to the traditional Sami understanding of time as cyclic rather than linear. The subtitle of the project, “Movements in the Sami Art World”, addresses the project’s goal to show movements in Sami art, and the dynamics and diversity in contemporary Sami art practices.44. Eva Skotnes Vikjord and Irene Snarby (Eds.), Gierdu: Bevegelser i samisk kunstverden/Sirdimat sámi duodje- ja dáiddamáilmmis, Bodø, 2009, p. 7.In addition to the touring exhibition, Gierdu consisted of seminars, a catalogue, and a website http://gierdu.no (12.05.2016). View all notes RDM cooperated with SKINN (Se Kunst i Nord-Norge) to curate Gierdu, which opened in 2009.55. SKINN is an abbreviation of a publicly funded organisation mediating art in northern Norway (Se Kunst I Nord-Norge). View all notes
The objects for exploring the construction of Sami cultural heritage will be works that were on display in Gierdu, not the entire collection. The exploration divides the works into two categories: First “Duodji and tradition”, then “Dáidda – The contemporary art practices”. The motivation for this division is the fact that it still prevails both in the definition of Sami art provided by Sami Artists’ Union and in RDM’s description of the art collection.66. The distinction appears in the Sami Artists’ Union’s definition of Sami art. See Synnøve Persen (Ed.), Sámi Dáiddárleksikona/Samisk Kunstnerleksikon, Alta, 1993, pp. 8–9 and at the RDM webpage http://rdm.no/norsk/samisk_kunst/ (12.05.2016). The distinction also appears in numerous texts about Sami art. See Hanna H. Hansen, Fortellinger om samisk samtidskunst, Karasjok, 2007, p. 13f. View all notes Consequently, the exploration will in addition reconsider this division.
Descriptions and analyses of the selected works will serve to elucidate my argument about the existence of twinning, appropriation, dialogues and encounters between tradition and modernity on various levels in Sami cultural heritage.