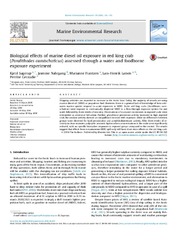 Shipping activities are expected to increase in the Arctic Seas. Today, the majority of vessels are using marine diesel oil (MDO) as propulsion fuel. However, there is a general lack of knowledge of how cold-water marine species respond to acute exposures to MDO. Arctic red king crabs (Paralithodes camtschaticus) were exposed to mechanically dispersed MDO in a flow-through exposure system for one week followed by three weeks of recovery. Observations of increased movements in exposed crabs were interpreted as avoidance behaviour. Further, glutathione peroxidase activity increased in high exposed crab, the catalase activity showed an insignificant increase with exposure, while no differences between groups were observed for lipid peroxidation and acetylcholinesterase activity. After three weeks of recovery in clean seawater, polycyclic aromatic hydrocarbons concentrations in the crabs were significantly reduced, with no specific biomarker responses in exposed groups compared to the control. The results suggest that effects from instantaneous MDO spill only will have short-term effects on the red king crab