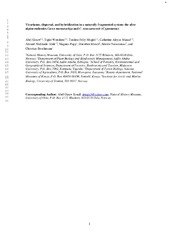 The naturally fragmented habitat on the tallest African mountains provides a good model system to study vicariance, dispersal, and hybridization. Many mountains are separated by lowland that likely was unsuitable for high-alpine plants even during cold climatic periods.
We explore the relative importance of these processes using two endemic sister species: the widespread Ethiopian/eastern East African Carex monostachya and the mainly western East African C. runssoroensis. These bog-forming sedges co-occur in some mountains and are hypothesized to hybridize. The two species were distinctly differentiated for genome-wide Amplified Fragment Length Polymorphisms (AFLPs), also in one mountain where they co-occur. However, the plants from another mountain showed strong signals of admixture. The results suggest initial divergence into one western and one northern/eastern lineage, followed by long-distance dispersal resulting in secondary contact zones. Also within species genetic diversity was clearly structured with distinct genetic groups on some, but not all mountains.
Differentiation levels varied considerably and did not always correspond to the extent of lowland habitat between mountains. The narrow Rift Valley in the otherwise nearly contiguous highlands in Ethiopia appears to present a much stronger barrier to dispersal than the extensive lowlands separating Ethiopia from East Africa. This may be a general pattern since it has been documented also for other afro-alpine species