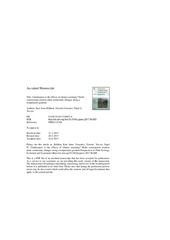 Organisms that modify the environment (niche constructors) are likely candidates to mediate the effects of climate warming. Here we assess tundra plant community changes along a temperature gradient and how these are modified in the presence of the common allelopathic dwarf shrub Empetrum nigrum and the large herbivore Rangifer tarandus. 2 We developed a structural equation model based on data from a field-based study of 1450 tundra plant communities across Northern Fennoscandia, covering a temperature gradient of 3.5°C, contrasting Rangifer densities, a range of Empetrum abundances in addition to gradients in topography and bedrock. We found temperature to be a significant positive predictor of Empetrum, herbaceous and woody plant abundances. However, the effect of temperature as predictor for herbaceous plant abundance was significantly reduced in communities with Empetrum present. For woody plant abundance Empetrum was a stronger predictor than temperature. In comparison, we found Rangifer density to have marginal or no effect on either herbaceous or woody plant abundance. These findings were not modified by either topography or bedrock.
Results from this study indicate that herbaceous plant responses to climate warming are currently reduced in communities where Empetrum is present, whereas the abundance of Empetrum and other woody plants is promoted. Results also indicate that any future Empetrum encroachment is likely to drive tundra communities towards slower process rates and lower biodiversity. As such our results substantiate the importance of understanding the dynamics of niche constructor species and include them in predictive models of climate change.