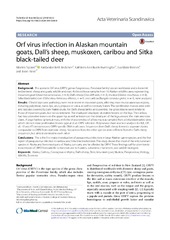 Background:
The zoonotic Orf virus (ORFV; genus Parapoxvirus, Poxviridae family) occurs worldwide and is transmit‑ted between sheep and goats, wildlife and man. Archived tissue samples from 16 Alaskan wildlife cases, representing mountain goat (Oreamnos americanus, n= 8), Dall’s sheep (Ovis dalli dalli, n= 3), muskox (Ovibos moschatus, n= 3), Sitka black‑tailed deer (Odocoileus hemionus sitkensis, n= 1) and caribou (Rangifer tarandus granti, n= 1), were analyzed.
Results:
Clinical signs and pathology were most severe in mountain goats, affecting most mucocutaneous regions, including palpebrae, nares, lips, anus, prepuce or vulva, as well as coronary bands. The proliferative masses were solid and nodular, covered by dark friable crusts. For Dall’s sheep lambs and juveniles, the gross lesions were similar to those of mountain goats, but not as extensive. The muskoxen displayed ulcerative lesions on the legs. The caribou had two ulcerative lesions on the upper lip, as well as lesions on the distal part of the legs, around the main and dew claws. A large hairless spherical mass, with the characteristics of a fibroma, was sampled from a Sitka black‑tailed deer, which did not show proliferative lesions typical of an ORFV infection. Polymerase chain reaction analyses for B2L, GIF, vIL‑10 and AT I demonstrated ORFV specific DNA in all cases. Sequences from Dall’s sheep formed a separate cluster, comparable to ORFV from domestic sheep. Sequences from the other species were different from the Dall’s sheep sequences, but almost identical to each other.
Conclusions:
This is the first major investigation of parapoxvirus infections in large Alaskan game species, and the first report of parapoxvirus infection in caribou and Sitka black‑tailed deer. This study shows that most of the wild ruminant species in Alaska and from most parts of Alaska, can carry and be affected by ORFV. These findings call for attention to transmission of ORFV from wildlife to livestock and to hunters, subsistence harvesters, and wildlife biologists.