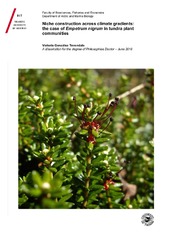 Here we studied at relevant spatial and temporal scales, how the evergreen dwarf shrub Empetrum nigrum, through its niche constructor ability, affects tundra plant communities along climatic gradients. Empetrum is a common dwarf shrub which is particularly abundant in many tundra ecosystems. As a niche constructor is has strong influence on many ecosystem processes and its direct effects can last well beyond its lifetime. Thus, it is important to understand how the abundance and distribution of Empetrum can affect tundra plant communities under climate change. In this thesis, we first expanded the knowledge on the chemical interference by Empetrum leaves, humus and the leaf phenol batatasin-III, by performing a series of bioassays on a large array of tundra species (Paper I). All species were found sensitive to Empetrum and batatasin-III. Further, by using climate gradients, we studied the mediating role of Empetrum abundance on the effects of increasing summer temperatures on tundra plant community structure (Paper II). The results showed that when Empetrum was present with as low as 25% of total community biomass, the expected increase in biodiversity and herbaceous plant biomass were less positive under increasing temperatures, while shrub biomass was enhanced. Second, we investigated the vegetation recovery of tundra heathlands dominated by Empetrum after extreme events over nine years and along a climatic gradient (Paper III). We found an extremely low vegetation recovery along the entire climatic gradient, which confirms that when Empetrum is the dominant species in the plant community, it is the strong niche constructor legacy, and not climate, that determines the outcome of recovery after extreme events, and hence plant community structure. Finally, we studied its resistance to fluctuating climatic conditions such as, varying growing seasons lengths and snow cover conditions along a climatic gradient (Paper IV). Empetrum appeared to be highly resistant to varying winter conditions and seemed to benefit from longer and warmer growing seasons, showing increases in vegetative and reproductive output. The results of the research suggest that the outcome of climate change in tundra communities where Empetrum is present might differ sharply from the general predictions on climate change in northern ecosystems.

Paper III and IV are not available in Munin.