Statistical properties of intermittent fluctuations in the boundary of fusion plasmas 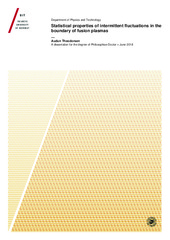 Fluctuation-induced plasma–wall interactions is a major concern for the next generation, high duty-cycle magnetic confinement fusion devices. The turbulence is generated in the outboard midplane transition region between the confined core plasma and the scrape-off layer where magnetic field lines intersect material walls. Here, filaments of hot and dense plasma, elongated in the field direction, detach from the main plasma and move radially outwards, driven by interchange motion. These filaments cause enhanced plasma–wall interactions compared to the level estimated by only considering time-averaged plasma parameters, reduce the efficiency of radio frequency wave heating and is likely related to the empirical discharge density limit. When measured as a time series from a stationary point (either as ion saturation current from electrical probes probes or as emitted light intensity from gas puff imaging), the statistical properties of the turbulent fluctuations in the scrape-off layer are robust across devices, confinement modes and plasma parameters. The highly intermittent fluctuations exhibit skewed and flattened probability density functions and power spectra that are flat for low frequencies and have a power-law tail for high frequencies. Conditional averaging reveals that large-amplitude structures have a sharp, exponential rise and a slower, exponential decay. Both the peak amplitudes of these structures and the waiting time between them are exponentially distributed. In this thesis, a stochastic model describing the time series as a superposition of uncorrelated, two-sided exponential pulses with exponentially distributed amplitudes arriving according to a Poisson process is analysed and its assumptions and predictions are compared with measurement data. This model is consistent with all the above statistical properties. The predictive capabilities of the model are improved by deriving expressions for the rate of threshold crossings and the time the signal spends above a given threshold level. The effects of additive noise and different amplitude distributions are also considered. Parameter estimation from moments, probability density functions and characteristic functions is examined using Monte-Carlo simulations. The model predictions are favorably compared to measurement data from experiments on the TCV and Alcator C-Mod devices.

Paper I, II, III and V are not available in Munin.