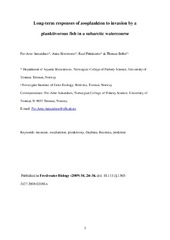 1. Introduced or invading predators may have strong impacts on prey populations of the recipient community mediated by direct and indirect interactions. The long‐term progression of predation effects, covering the invasion and establishment phase of alien predators, however, has rarely been documented.

2. This paper documents the impact of an invasive, specialized planktivorous fish on its prey in a subarctic watercourse. Potential predation effects on the crustacean plankton, at the community, population and individual levels, were explored in a long‐term study following the invasion by vendace (Coregonus albula).

3. Over the 12‐year period, the density and species richness of zooplankton decreased, smaller species became more abundant and Daphnia longispina, one of the largest cladocerans, was eliminated from the zooplankton community.

4. Within the dominant cladocerans, including Daphnia spp., Bosmina longispina and Bosmina longirostris, the body size of ovigerous females and the size at first reproduction decreased after the arrival of the new predator. The clutch sizes of Daphnia spp. and B. longirostris also increased.

5. Increased predation pressure following the vendace invasion induced many effects on the crustacean zooplankton, and we document comprehensive and strong direct and indirect long‐term impacts of an introduced non‐native predator on the native prey community.

This is the peer reviewed version of the following article: Amundsen, P.-A., Siwertsson, A-, Primicerio, R. & Bøhn, T. (2009). Long-term responses of zooplankton to invasion by a planktivorous fish in a subarctic watercourse. Freshwater Biology, 54, 24-34, which has been published in final form at https://doi.org/10.1111/j.1365-2427.2008.02088.x. This article may be used for non-commercial purposes in accordance with Wiley Terms and Conditions for Use of Self-Archived Versions.