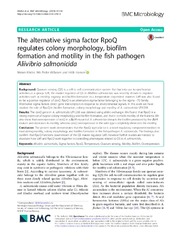 Background: Quorum sensing (QS) is a cell-to cell communication system that bacteria use to synchronize activities as a group. LitR, the master regulator of QS in Aliivibrio salmonicida, was recently shown to regulate activities such as motility, rugosity and biofilm formation in a temperature dependent manner. LitR was also found to be a positive regulator of rpoQ. RpoQ is an alternative sigma factor belonging to the sigma −70 family. Alternative sigma factors direct gene transcription in response to environmental signals. In this work we have studied the role of RpoQ in biofilm formation, colony morphology and motility of A. salmonicida LFI1238.

Results: The rpoQ gene in A. salmonicida LFI1238 was deleted using allelic exchange. We found that RpoQ is a strong repressor of rugose colony morphology and biofilm formation, and that it controls motility of the bacteria. We also show that overexpression of rpoQ in a ΔlitR mutant of A. salmonicida disrupts the biofilm produced by the ΔlitR mutant and decreases its motility, whereas rpoQ overexpression in the wild-type completely eliminates the motility.

Conclusion: The present work demonstrates that the RpoQ sigma factor is a novel regulatory component involved in modulating motility, colony morphology and biofilm formation in the fish pathogen A. salmonicida. The findings also confirm that RpoQ functions downstream of the QS master regulator LitR. However further studies are needed to elucidate how LitR and RpoQ work together in controlling phenotypes related to QS in A. salmonicida.