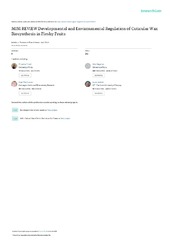 The aerial parts of land plants are covered by a hydrophobic layer called cuticle that limits non-stomatal water loss and provides protection against external biotic and abiotic stresses. The cuticle is composed of polymer cutin and wax comprising a mixture of very-long-chain fatty acids and their derivatives, while also bioactive secondary metabolites such as triterpenoids are present. Fleshy fruits are also covered by the cuticle, which has an important protective role during the fruit development and ripening. Research related to the biosynthesis and composition of cuticles on vegetative plant parts has largely promoted the research on cuticular waxes in fruits. The chemical composition of the cuticular wax varies greatly between fruit species and is modified by developmental and environmental cues affecting the protective properties of the wax.
This review focuses on the current knowledge of the cuticular wax biosynthesis during fleshy fruits development, and on the effect of environmental factors in regulation of the biosynthesis. Bioactive properties of fruit cuticular waxes are also briefly discussed, as well as the potential for recycling of industrial fruit residues as a valuable raw material for natural wax to be used in food, cosmetics and medicine.