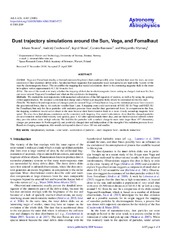 Context - Vega and Fomalhaut display a thermal emission brightness that can possibly arise from hot dust near the stars, an inner extension of their planetary debris disks. There was brought up an idea that nm-sized dust particles are kept in the vicinity of the stars by electromagnetic forces. This resembles the trapping that model calculations show in the corotating magnetic field in the inner heliosphere within approximately 0.2 AU from the Sun.

Aims - The aim of this work is to study whether the trapping of dust due to electromagnetic forces acting on charged dust near the Sun can occur around Vega and Fomalhaut and what are the conditions for trapping.

Methods - We study the dust trajectories with numerical calculations of the full equation of motion, as well as by using the guiding center approximation. We assume a constant dust charge and a Parker-type magnetic field which we estimate for the two stars.

Results - We find no bound trajectories of charged particles around Vega or Fomalhaut as long as the radiation pressure force exceeds the gravitational force, i.e. for particles smaller than 1 μm. There could exist a trapping zone inside of 0.02 AU for Vega and 0.025 AU for Fomalhaut, but only for those particles with radiation pressure force smaller than gravitational force. In comparison to the Sun, the trapping conditions would occur closer to the stars because their faster rotation leads to a more closely wound-up magnetic field spiral. We also show that plasma corotation can be consistent with trapping. Our model calculations show that the charged particles are accelerated to stellar wind velocity very fast, pass 1 AU after ~3 days, and are further ejected outward where they pass the debris disks with high velocity. We find this for particles with surface charge-to-mass-ratio larger than 10−6 elementary charges per proton mass for both negatively and positively charged dust and independent on the strength of the radiation pressure force. Based on charging assumptions this would correspond to dust of sizes 100 nm and smaller.