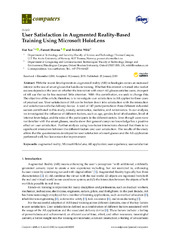 With the recent developments in augmented reality (AR) technologies comes an increased interest in the use of smart glasses for hands-on training. Whether this interest is turned into market success depends at the least on whether the interaction with smart AR glasses satisfies users, an aspect of AR use that so far has received little attention.
With this contribution, we seek to change this. The objective of the article, therefore, is to investigate user satisfaction in AR applied to three cases of practical use. User satisfaction of AR can be broken down into satisfaction with the interaction and satisfaction with the delivery device.
A total of 142 participants from three different industrial sectors contributed to this study, namely, aeronautics, medicine, and astronautics. In our analysis, we investigated the influence of different factors, such as age, gender, level of education, level of Internet knowledge, and the roles of the participants in the different sectors. Even though users were not familiar with the smart glasses, results show that general computer knowledge has a positive effect on user satisfaction. Further analysis using two-factor interactions showed that there is no significant interaction between the different factors and user satisfaction.
The results of the study affirm that the questionnaires developed for user satisfaction of smart glasses and the AR application performed well, but leave room for improvement.