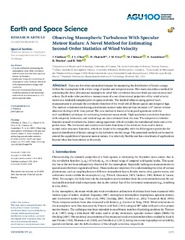 There are few observational techniques for measuring the distribution of kinetic energy within the mesosphere with a wide range of spatial and temporal scales.
This study describes a method for estimating the three‐dimensional mesospheric wind field correlation function from specular meteor trail echoes. Each radar echo provides a measurement of a one‐dimensional projection of the wind velocity vector at a randomly sampled point in space and time.
The method relies on using pairs of such measurements to estimate the correlation function of the wind with different spatial and temporal lags. The method is demonstrated using a multistatic meteor radar data set that includes ≈105 meteor echoes observed during a 24‐hr time period.
The new method is found to be in good agreement with the well‐established technique for estimating horizontal mean winds. High‐resolution correlation functions with temporal, horizontal, and vertical lags are also estimated from the data. The temporal correlation function is used to retrieve the kinetic energy spectrum, which includes the semidiurnal mode and a 3‐hr period wave. The horizontal and vertical correlation functions of the wind are then used to derive second‐order structure functions, which are found to be compatible with the Kolmogorov prediction for spectral distribution of kinetic energy in the turbulent inertial range.
The presented method can be used to extend the capabilities of specular meteor radars. It is relatively flexible and has a multitude of applications beyond what has been shown in this study.

The multistatic specular meteor radar measurements (Vierinen, 2019) used in this study can be downloaded from DataverseNO (https://doi.org/10.18710/PBYWJ0).