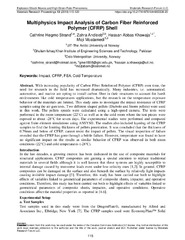 With increasing popularity of Carbon Fiber Reinforced Polymer (CFRP) over time, the need for research in the field has increased dramatically. Many industries, i.e. aeronautical, automotive, and marine are opting to install carbon fiber in their structures to account for harsh environments like cold temperatures applications, but the research on the temperature exposure behavior of the materials are limited.
This study aims to investigate the impact resistance of CFRP samples using the air gun tests. Two different shaped pellets (Diabolo and Storm pellets) were used in this work. The pellets speeds were calculated using a high-speed camera. The tests were performed in in the room temperature (22°C) as well as in the cold room where the test pieces exposed to about -28°C for seven days. The experimental studies were performed and compared against finite element simulations using ANSYS®.
The studies also included layering of the CFRP samples to find the limiting thickness of pellets penetration. It was concluded that the thickness of 0.79mm and below of CFRP, cannot resist the impact of pellets. The visual inspection of failure revealed that the CFRP has gone through a brittle failure.
However, temperature was found to have no significant impact on the results as similar behavior of CFRP was observed in both room conditions (22°C) and cold temperatures (-28°C).