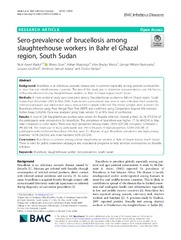 Background - Brucellosis is an infectious zoonotic disease and is common especially among pastoral communities in most low and middle-income countries. The aim of this study was to determine sero-prevalence, and risk factors of Brucella infection among Slaughterhouse workers, in Bahr el Ghazal region, South Sudan.