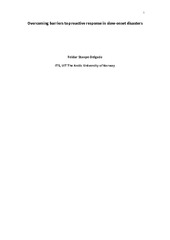 Disasters differ markedly in their speed of manifestation, which in turn greatly affects how researchers as well as authorities interpret and respond to them. In theory, disasters with a gradual and creeping onset are easier to manage than sudden and unexpected ones. However, the unfortunate reality is that hazards with a slow-onset are often ignored, left smouldering in the background, while their impacts gradually build up and strengthen over time – sometimes irreversibly so – until eventually becoming critical emergencies. This is also true for disasters where forecasts provided decision makers with several days' advance notice. Enhancing the understanding of these phenomena, including why they rarely secure proactive response, is therefore central in achieving the ambitious targets set out in the Sendai Framework for Disaster Risk Reduction (SFDRR).

By focusing on six traits, or lessons associated with slow-onset disasters, this background paper sets out to elaborate on the unique challenges posed by slow-onset disasters with implications for disaster risk reduction (DRR) work. This paper summarizes these traits as:

Addressing these obstacles head on as the SFDRR process matures will enable both better prescriptive policy recommendations, as well as research that is more sensitive to the different demands introduced by slow-onset disasters.

Link to the project: https://gar.unisdr.org/.