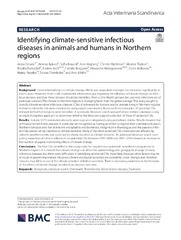 Background - General knowledge on climate change effects and adaptation strategies has increased significantly in recent years. However, there is still a substantial information gap regarding the influence of climate change on infectious diseases and how these diseases should be identified. From a One Health perspective, zoonotic infections are of particular concern. The climate in Northern regions is changing faster than the global average. This study sought to identify climate-sensitive infectious diseases (CSIs) of relevance for humans and/or animals living in Northern regions. Inclusion criteria for CSIs were constructed using expert assessments. Based on these principles, 37 potential CSIs relevant for Northern regions were identified. A systematic literature search was performed in three databases using an explicit stepwise approach to determine whether the literature supports selection of these 37 potential CSIs.

Results - In total, 1275 nominated abstracts were read and categorised using predefined criteria. Results showed that arthropod vector-borne diseases in particular are recognised as having potential to expand their distribution towards Northern latitudes and that tick-borne encephalitis and borreliosis, midge-borne bluetongue and the parasitic infection fasciolosis can be classified as climate-sensitive. Many of the other potential CSIs considered are affected by extreme weather events, but could not be clearly classified as climate-sensitive. An additional literature search comparing awareness of climate influences on potential CSIs between 1997–2006 and 2007–2016 showed an increase in the number of papers mentioning effects of climate change.

Conclusions - The four CSIs identified in this study could be targeted in a systematic surveillance programme in Northern regions. It is evident that climate change can affect the epidemiology and geographical range of many infectious diseases, but there were difficulties in identifying additional CSIs, most likely because other factors may be of equal or greater importance. However, climate-ecological dynamics are constantly under change, and therefore diseases may fall in or out of the climate-sensitive definition over time. There is increasing awareness in the literature of the effects of climate change on infectious diseases over time.