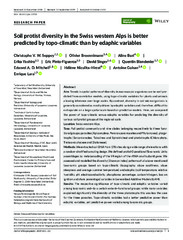 Aim - Trends in spatial patterns of diversity in macroscopic organisms can be well predicted from correlative models, using topo‐climatic variables for plants and animals allowing inference over large scales. By contrast, diversity in soil microorganisms is generally considered as mostly driven by edaphic variables and, therefore, difficult to extrapolate on a large spatial scale based on predictive models. Here, we compared the power of topo‐climatic versus edaphic variables for predicting the diversity of various soil protist groups at the regional scale.

Main conclusions - Topo‐climatic variables (particularly slope steepness and summer temperature if we consider their significance in the GAMs) were, on average, better predictors of protist diversity at the landscape scale than edaphic variables. However, the predictive power of these variables on diversity differed considerably among taxonomic groups; such relationships may be due to direct and/or indirect (e.g. biotic) influences (like with parasitic taxa, where low predictive power is most likely explained by the absence of information on the hosts’ distribution). Future prospects include using such spatial models to predict hotspots of diversity and disease outbreaks.