Soil chemistry changes beneath decomposing cadavers over a one-year period 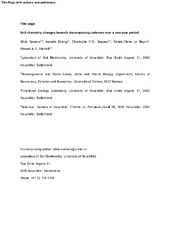 Decomposing vertebrate cadavers release large, localized inputs of nutrients. These temporally limited resource patches affect nutrient cycling and soil organisms. The impact of decomposing cadavers on soil chemistry is relevant to soil biology, as a natural disturbance, and forensic science, to estimate the postmortem interval. However, cadaver impacts on soils are rarely studied, making it difficult to identify common patterns.

We investigated the effects of decomposing pig cadavers (Sus scrofa domesticus) on soil chemistry (pH, ammonium, nitrate, nitrogen, phosphorous, potassium and carbon) over a one-year period in a spruce-dominant forest. Four treatments were applied, each with five replicates: two treatments including pig cadavers (placed on the ground and hung one metre above ground) and two controls (bare soil and bags filled with soil placed on the ground i.e. “fake pig” treatment). In the first two months (15–59 days after the start of the experiment), cadavers caused significant increases of ammonium, nitrogen, phosphorous and potassium (p < 0.05) whereas nitrate significantly increased towards the end of the study (263–367 days; p < 0.05). Soil pH increased significantly at first and then decreased significantly at the end of the experiment. After one year, some markers returned to basal levels (i.e. not significantly different from control plots), whereas others were still significantly different. Based on these response patterns and in comparison with previous studies, we define three categories of chemical markers that may have the potential to date the time since death: early peak markers (EPM), late peak markers (LPM) and late decrease markers (LDM). The marker categories will enhance our understanding of soil processes and can be highly useful when changes in soil chemistry are related to changes in the composition of soil organism communities. For actual casework further studies and more data are necessary to refine the marker categories along a more precise timeline and to develop a method that can be used in court.